Note:  All products in this post were given to me by Island Batik as part of their Ambassador program.

My first challenge as a 2019 Island Batik Ambassador is:  Magnificent Minis.  The rules were to use any technique, using any fabric (except the Surprise fabric) to make a maximum 24 x 24 inch mini during the month of February.  An easy task I thought...until I sat down to design something.  😊

As I was looking for inspiration, I found a book in my sewing room that I didn't know I had and have no idea where or when I got it -- The Modern Quilt Workshop by Weeks Ringle and Bill Kerr.  When I picked up the book, it fell open to a brightly coloured pattern called Confetti, using batik fabrics.

Here is Tumbling Triangles -- my version of the pattern.  I printed the templates at 85% to get a 18-inch mini. 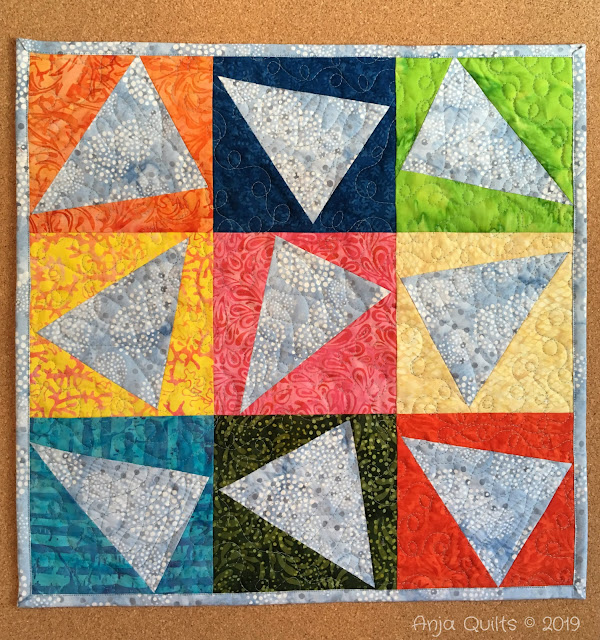 Once I decided on which fabrics to use, I only cut fabric for a couple of blocks to see how piecing went and to see what size block I'd end up with.  I used the Snowman print from the Icicle fabric collection for the triangle centres. 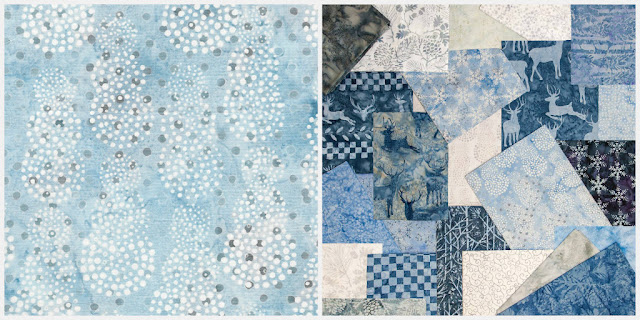 Piecing went quickly, so I cut more fabric and continued sewing.  And before I knew it, there a quilt top.  And then I realized I hadn't taken any in-progress photos.  Oops. 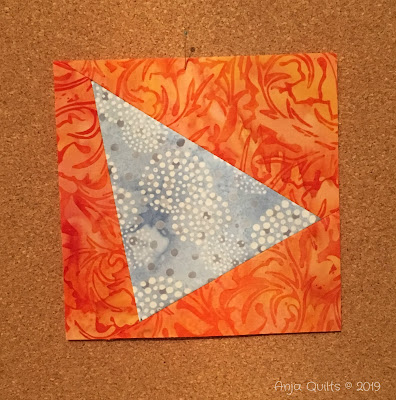 I used the Island Batik Stash Builders for the background.  These are rolls of 5-inch strips of fabric.  There are so many awesome prints and colours.  It was difficult to choose which ones to use.  I can't wait to play with them again. 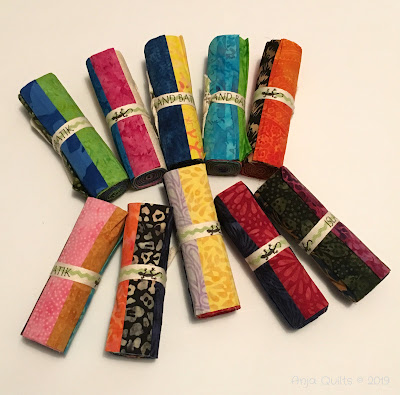 I did a loopy stipple in the background and a wishbone motif in the triangle centres using Aurifil thread #5008 Sugar Paper. 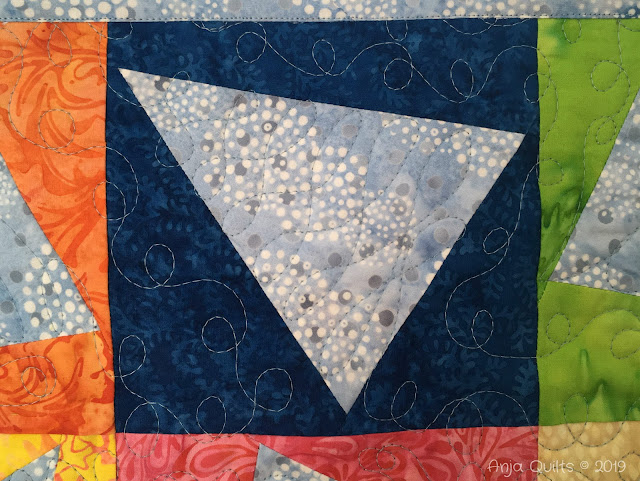 I used Hobbs Thermore batting.  It's a thinner batting used for clothing and miniatures. 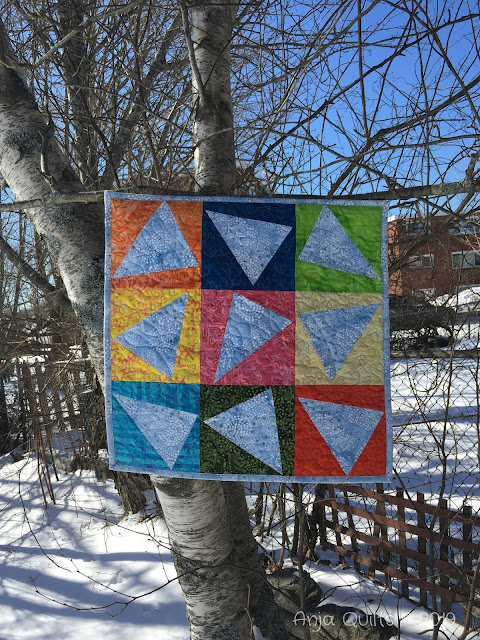 I was feeling pretty good about my efforts...until I saw what other Ambassadors had made.  Wow!   The talent is amazing.  I generally don't compare myself to others, but I felt my mini was inadequate and didn't come close to the skill level of the other Ambassadors.  I encourage you to check out some of the fabulous projects -- see the Ambassador list at the end of this post. 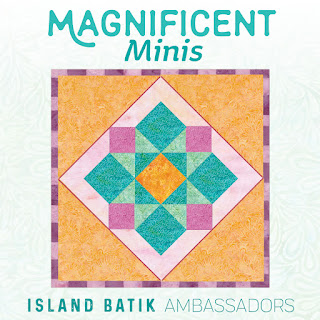 So I decided to make another mini.  The end of the month was quickly approaching, but there was still time.  I decided on floating triangles using the black solid fabric as the background.  And then on Sunday, the theme for the next Project Quilting challenge was announced -- Pixel Play.  So I decided to use floating squares instead of triangles to complete two challenges with one project.

I was travelling on Monday to attend my aunt's funeral, and we stopped to have something to eat.  We ended up at McDonald's, and this was their wallpaper.  I decided to re-create a part of the wallpaper (as shown in the green box) for my mini. 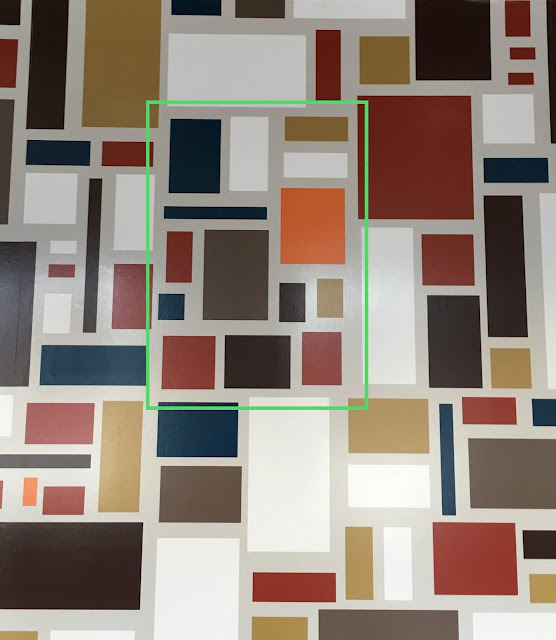 As we continued driving, I was thinking that the wallpaper reminded me of roads.  And then I started thinking of the times in the summer I spent with my cousins and being at my aunt's house.  It's a small town, and we walked everywhere (not that there was a lot of "everywhere" to go LOL).  The term running the roads was commonly used.  I remember walking down the road to Blueberry Hill to pick blueberries with my aunt and cousins.

Here is my fabric pull.  And once again, I forgot to take in-progress photos.  I need to put a note on my sewing machine that says:  Stop and Take Photos!! 😊 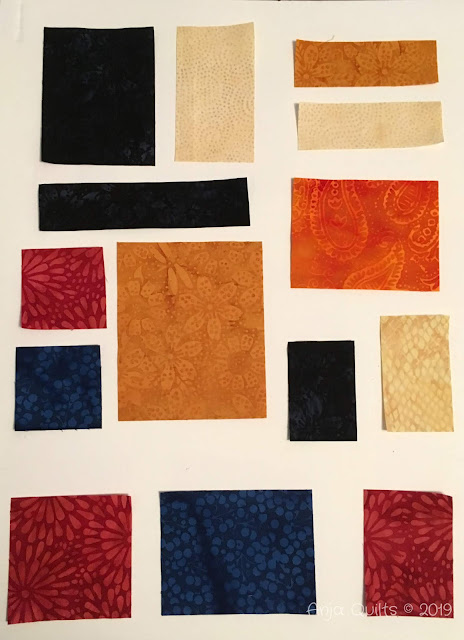 I used the Island Batik solid gray for the background (to represent the roads/pavement) and the Island Batik Stash Builders for the squares.  I quilted a diagonal grid using Aurifil thread #2600 Dove and used the Hobbs Heirloom Premium 80/20 batting, which is my go-to batting of choice. 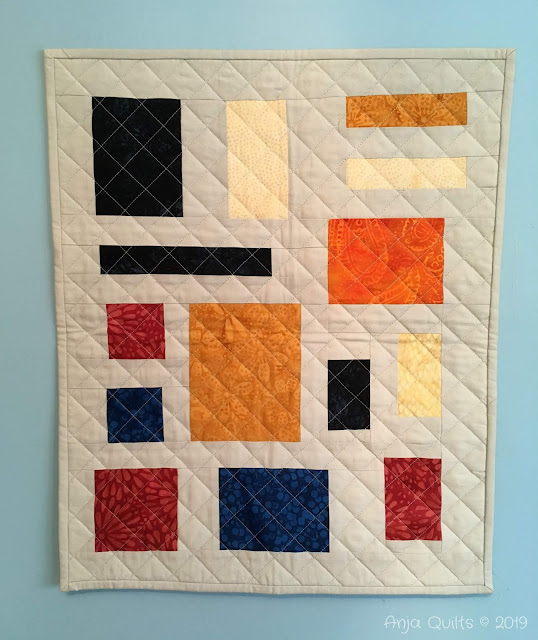 This mini finishes at 15.5 x 19 inches, and it's called Running the Roads. 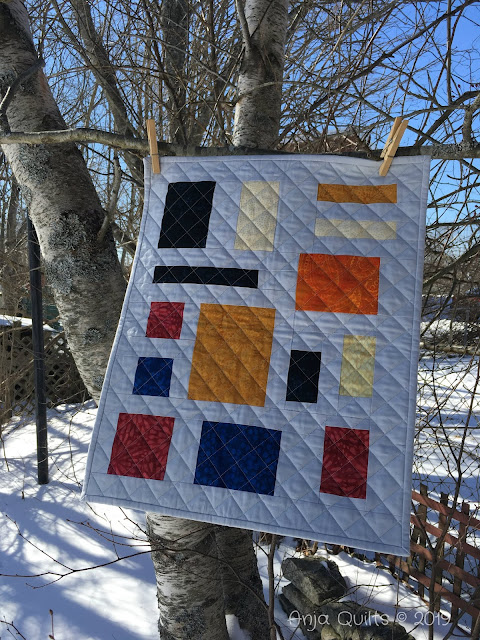 I'm linking up at:


Thank Goodness It's Finished Friday @ Alycia Quilts
Can I Get a Whoop Whoop? @ Confessions of a Fabric Addict
Finished or Not Friday @ Busy Hands Quilts
Needle and Thread Thursday @ My Quilt Infatuation
Brag About Your Beauties @ From Bolt to Beauty
Show Off Saturday @ Sew Can She 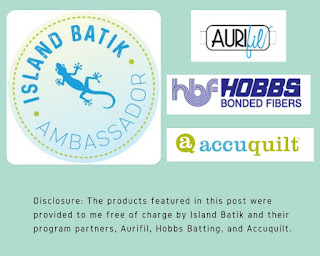